Twin Dragons Taekwondo has a knowledgeable, experienced, and dedicated staff of instructors. Our instructors not only teach martial arts, but foster personal growth through the tenants of taekwondo: courtesy, integrity, perseverance, self control, and indomitable spirit. 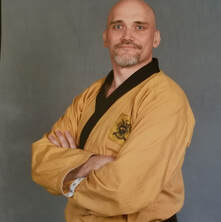 Master Hardin started training in taekwondo at the age of 16 and has been training for over 26 years. He developed his foundation in taekwondo training with different Masters including, Grandmaster Bong Yul Shin, 9th dan. Taekwondo is a passion, love, and life for Master Hardin. His main focuses are teaching quality taekwondo and producing high quality black belt students. He has earned medals at the USAT Nationals 3 times and qualified for  USAT Poomsae Team Trials 6 times. Master Hardin continues to develop his own skill and knowledge by regularly training with high ranking black belts, USA Team Members, and past Olympians. Master Hardin also holds a Blue Belt in Iaijutsu (Samauri Sword) and a Blue Belt-2 Stripe in Gracie Barra Brazilian Jui jitsu. Master Hardin trains with several weapons including Bo Staff, Nunchucku, Sai, Sticks, Kamas, and Tonfas. 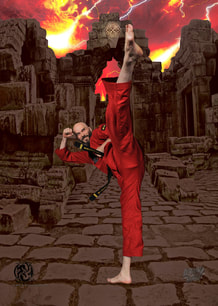 Master Philip Hardin started his journey in taekwondo a couple years after his twin brother, Thomas.  He has trained in taekwondo on and off for over 20 years. He developed his foundation in taekwondo training alongside his brother. Master Hardin takes pride in teaching quality taekwondo and producing high quality students. He earned two medals (poomsae, sparring) at the USA Taekwondo Nationals in 2010 as a Red Belt.  Master Hardin is the Head Instructor at Twin Dragons Taekwondo II Union and Twin Dragons Taekwondo II Chesterfield (JCC) locations. 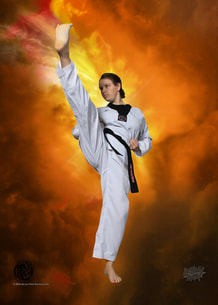 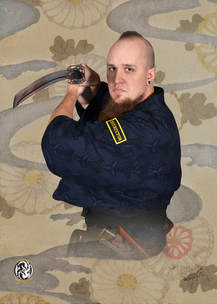 Mr. Aaron Kruel | Sword Instructor
Mr. Kruel's interest in iaijutsu began 14 years ago and it quickly became one of his greatest passions. He was able to travel to Spain (where the finest swords are made outside of Japan) and purchased his first katana. Mr. Kruel has spent years studying kage ryu, and now studies nami ryu; he frequently travels to further his knowledge of sword martial arts. Mr. Kruel's curriculum includes tanrengata (solo forms), suburi (swinging drills), battoho (combative drawing and cutting), and tameshigiri (cutting on tatami mats).
Mrs. Danielle Pedersen 3rd Dan | Instructor
Mrs. Pedersen's two kids started training with Twin Dragons Taekwondo in our Little Ninjas program.  When they moved up into the older Taekwondo program, Mrs. Pedersen started training as well. Mrs. Pedersen has earned medals 7 times in Sparring at Nationals.  Mrs. Pedersen has a passion for Sparring and is one of Twin Dragons Taekwondo's main coaches.

Mr. Burns started training in Taekwondo alongside Master Hardin back when they were teenagers. Mr. Burns has trained on and off in Taekwondo over the years. Mr. Burns always focuses on Quality with students ensuring they can really defend themselves. Mr. Burns is a 2 time National medalist. He has earned a medal in Sparring, both as a Red Belt and a Black Belt. Mr. Burns is a Referee and a Coach within Twin Dragons Taekwondo.
Mr. Ross Marquart, 3rd Dan | Instructor

Mr. Marquart started training in Martial Arts as a teenager. Mr. Marquart also holds a Second Degree Black Belt in Hapkido. Mr. Marquart has a passion for Self Defense and ensuring students can realistically defend themselves in a street altercation.

Ms. Veronica started training in Taekwondo at the age of 5. She is Master Hardin's oldest daughter and has been training for over 15 years. Ms. Veronica has a passion for forms and sparring and tries to pass that passion on to the students who she trains.  Ms. Veronica is a 4 time National medalist. She is one of the main Coaches within Twin Dragons Taekwondo.